Slim and Trim Roofing Apple Valley is focused on roof and siding replacement in the Apple Valley, MN and surrounding areas. We specialize in working with you and your insurance company and provide assistance and knowledge throughout the entire claims process.

We Believe in Igniting Potential

Potential lives in all of us. We have a bold and ambitious goal to help more Twin Cities kids alongside Big Brothers Big Sisters : Twin Cities.

Slim and Trim Construction is a company founded on honesty and efficiency. After working for another company, a group of us decided it was time to start a new chapter. We took our knowledge and utilized the contacts we had made to start a new company without sacrificing the dependability of a seasoned company.

We will do everything your project needs but won’t charge you for frivolous extras just to make an extra buck. We use top of the line, Minnesota-made products so you can trust your home will last through our crazy climate. We refuse to use inferior products or cut corners. In construction, the short-cuts come at much too high a cost down the road; we want to do the job right the first time.

We are committed to doing a great job and pleasing you as our client. If ever you have a question before, during, or after your project, don’t hesitate to call our office or your assigned project manager.

Slim and Trim far exceeded our expectations. After a bad storm, they came the next day and found extensive damage to our roof. They squeezed us into their schedule just 2 weeks later and also gave us a very fair price on gutters. Fast, friendly service with quality that has left neighbors complimenting the work. Thomas was amazing to work with and was always prompt if we needed something. We highly recommend Slim and Trim for your next home project!

Shout out to Randy and his team. Randy saw our project through from start to finish. He was here during our insurance claim inspection, helped us pick a color for our new roof, and during the install. He answered all of our questions and made sure to keep us in the loop with every step of the process. We would 100% recommend Randy and Slim and Trim to anyone needing a roof or other exterior work.

Great experience with Slim and Trim! In the process of preparing to sell our house, we noticed a few shingles raised up on our roof. Our realtor recommended Slim and Trim, and Randy came out the same day we called and fixed the nail pops at no charge! Then he went above and beyond by going to the local hardware store to get some sealant to make extra sure the shingles stayed in place, AND cleared a roof gutter while he was at it. Definitely recommend Slim and Trim, and we will be repeat customers!

I am definitely impressed with the way my roof turned out! Not only was I impressed but the City Inspector was very complimentary of the work. Slim and Trim did an excellent job meeting with me multiple times addressing my concerns and answering my questions. The pricing was right inline with my other quotes. I highly recommend them as trusted roofing business professionals !

Slim and Trim did a fantastic job. Not only were they great to work with, they are very efficient. They began work at 7:00 AM and before 2:00 PM the same day they were completely done. Everything cleaned up and on the road. Roof looks gorgeous.

Slim and Trim was actually recommended by my insurance man after straight line winds and a hail storm. For the 1st time in 30 years of dealing with contractors I felt informed with the process and the work. The work was very well done by the crews and Randy helped us along the way with paperwork, the mortgage company, reconciliations of his work vs other damage, and overall assurance. I would highly recommend!

The area that became Apple Valley was first established in 1858 as Lebanon Township, and remained a farming community for nearly a century. In the mid-1950s, residential developments started replacing farmland.[8] Orrin Thompson, a real estate developer, was responsible for the city’s early development. He contracted a company to determine where the next growth in the Twin Cities would be. It was one-half of a mile from County Road 42 and Cedar Avenue. Thompson bought the first houses and streets from the Brobacks, who built the city’s first four houses. The firm that selected this area was in Apple Valley, California, so Thompson took that name for the development. An alternate explanation for the name change exists, however. According to local developer Henry Broback, Lebanon Township was renamed Apple Valley because “…when you drive east on (County Road) 42 and turn to enter Lebanon, it reminded them of Apple Valley, California, which was a nice community.”

Voters in the township voted to incorporate in the 1968 general election. They also selected the name Apple Valley over the name Lebanon Valley by a vote of 1376 to 757.

Apple Valley is home to the Minnesota Zoo, a nationally recognized zoological garden that houses hundreds of animals from several distinct climatological zones. Collections include an indoor Tropics Trail featuring animals from the worlds rain forests and tropical habitats, the Minnesota Trail with native animals from Minnesota including black bears, wolves, wolverines and beaver pond. The Northern Trail features large animals from the worlds cold climates. Highlights of this trail are musk ox, Asian wild horses, Takins from China and animals from remote east coast including brown bears, amur leopards, and wild boars. The zoo also features an aquarium, an exhibit of penguins from South Africa and the popular Japanese snow monkeys. 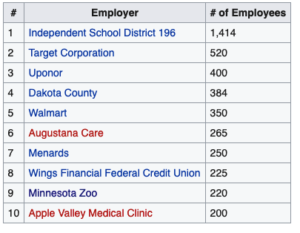